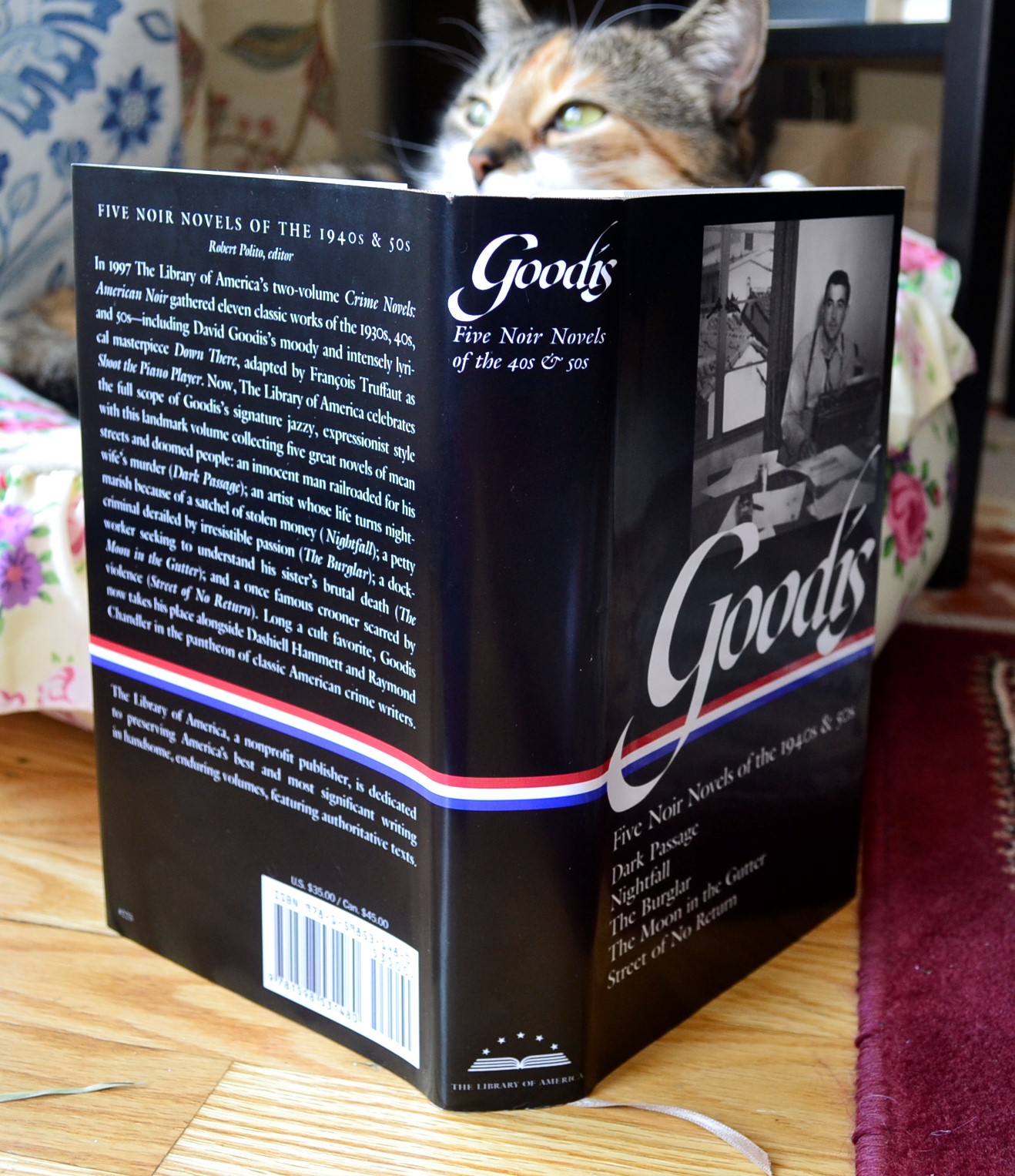 Sunday mornings are something I look forward to every week. They start maybe an hour later than every other morning in the week and involve a generous brunch in front of TCM’s Noir Alley, hosted by Eddie Mueller. We have tea, hash browns, eggs, and toast while we get lost in the snappy dialogue and intricate twisting storylines of Noir.

I found noir as a genre relatively late. I’ve always been interested in true crime, but for some reason, my younger self just wasn’t drawn to the black and white grit of classic movies until it was included in our cable package. It was film that propelled my quest to find the novels that inspired the motion pictures and that’s where I came across this collection of David Goodis’ work – surprisingly hidden in a local bookstore.

Normally, I don’t like collected editions of multiple novels, but I made an exception here because, simply, it is beyond difficult to find a lot of noir other than Chandler and Hammett. Which is a shame, because a lot of these authors defined not just noir but everything that noir in turn created.

I remember seeing a lot of Library of America editions of classics while I was in university and thinking, ‘Wow, that’s a very beautiful book,’ but I never actually purchased one until this volume a few months ago. Well, I can confirm that, yes, the book is very beautifully printed. The pages are thin but just substantial enough, the print is the perfect size with a nice typeface, and the binding is excellent. The book is clearly made to last — and made to be read and referenced. I appreciate the nod to durability because I’ve had one too many covers curled and spines creased from even the gentlest of care.

Probably the most famous of the five novels, Dark Passage is the story of a man that has been wrongfully imprisoned for the murder of his wife. It was made into a movie of the same name starring Humphrey Bogart and Lauren Bacall.

Goodis’ style is hard to describe as it is both lush at times but also sparse and moves quickly but also can take its time. I think the real art of his work is what he does with pacing and character. Dark Passage is definitely driven by characters and the tensions between them which can keep one feverishly reading chapter after chapter in quick succession. Goodis is particularly skilled at endings and the last chapter especially just flies through your fingers.

Nightfall also focuses on the trials and tribulations of an innocent man accused of a crime – this time a robbery as well as a murder. The man is trapped between a detective and the real perpetrators of the crime in two-ended game of cat and mouse.

This novel is where Goodis’ pacing really shines as he handles multiple characters with multiple pursuits and multiple motives simultaneously and does an artful job weaving it all together. Complete with a neat, though perhaps a slightly predictable, ending. The technique of Nightfall alone makes it worth reading, even if the plot didn’t appeal to me as much as some of the others in the collection.

Perhaps the most interesting novel of the collection, The Burglar is, unsurprisingly, about a tight knit group of burglars and some stolen emeralds.

However, once again Goodis uses the characters and tensions to turn a plot that might strike some as cliché and turn it in a new direction. The group of burglars has shaped itself into a kind of family with roles, obligations, and duties that Goodis explores all the way up to the subsequent downfall and destruction of every member of it. The ending is dark, powerful, and abrupt in a very masterful way.

Of the five, this novel is probably my favourite, and though the idea of a crime family having the dynamics of familial relationships and business politics rolled into one isn’t unique to Goodis, the author does bring something different to the idea. He infuses it with a sense of drama and complexity that one does not often come across.

The Moon in the Gutter

The Moon is the Gutter is a novel that is about many things but ends in a futile nothingness that is engaging in and of itself. A man struggles to find his sister’s rapist, but at the same time struggles with the squalor that he lives in and is a part of. Goodis intentionally makes the protagonist an utterly frustrating combination of drive and complacency until everything slips away into the gutter and the alley with old bloodstains.

The only likeable character in The Moon in the Gutter is actually not in the action of the book, having died before the commencement of the events described in it. It takes a lot of technique to keep a reader reading when every character is unlikable, and Goodis accomplishes this with a contemplative driving style of narrative that keeps pages turning — which is no minor feat.

Street of No Return

The collection ends with the strangest of the novels, Street of No Return in which a singer destroyed is caught up in the middle of a race riot that has been orchestrated by a criminal enterprise searching for territory.

There are a few twists and turns that are interesting, but the plot moves along in fits and starts and there are a few shortcomings that are products of the time and don’t make them easier to read. The ending is a punch in the gut, though. Succinct, dark, and drawing the narrative in a very well written full circle.

In every volume of collected novels there are ones that shine more than others, but that isn’t a reason to forgo a volume like this one. Even in the novels that I didn’t like as much, I learned quite a bit about the scope of the genre and what Goodis contributed to it.

In general, I really like Goodis’ work. His novels are entertaining, paced very well, and explore tropes of the genre without getting bogged down with them. Light reading, but interesting and not without just the right amount of depth when necessary.

Watching noir on a bright, lazy, sunny Sunday morning over a cup of coffee is probably not the typical venue for the content presented, but I have to admit that I kind of like the contrast. There’s something just a little bit magical about the juxtaposition.

Usually there’s a cat playing around my feet while a gat goes off on the screen and black cars race through rain-swept alleys. The bunny hops across the carpet while a tense interrogation is going down at the precinct.

I wouldn’t want it any other way.