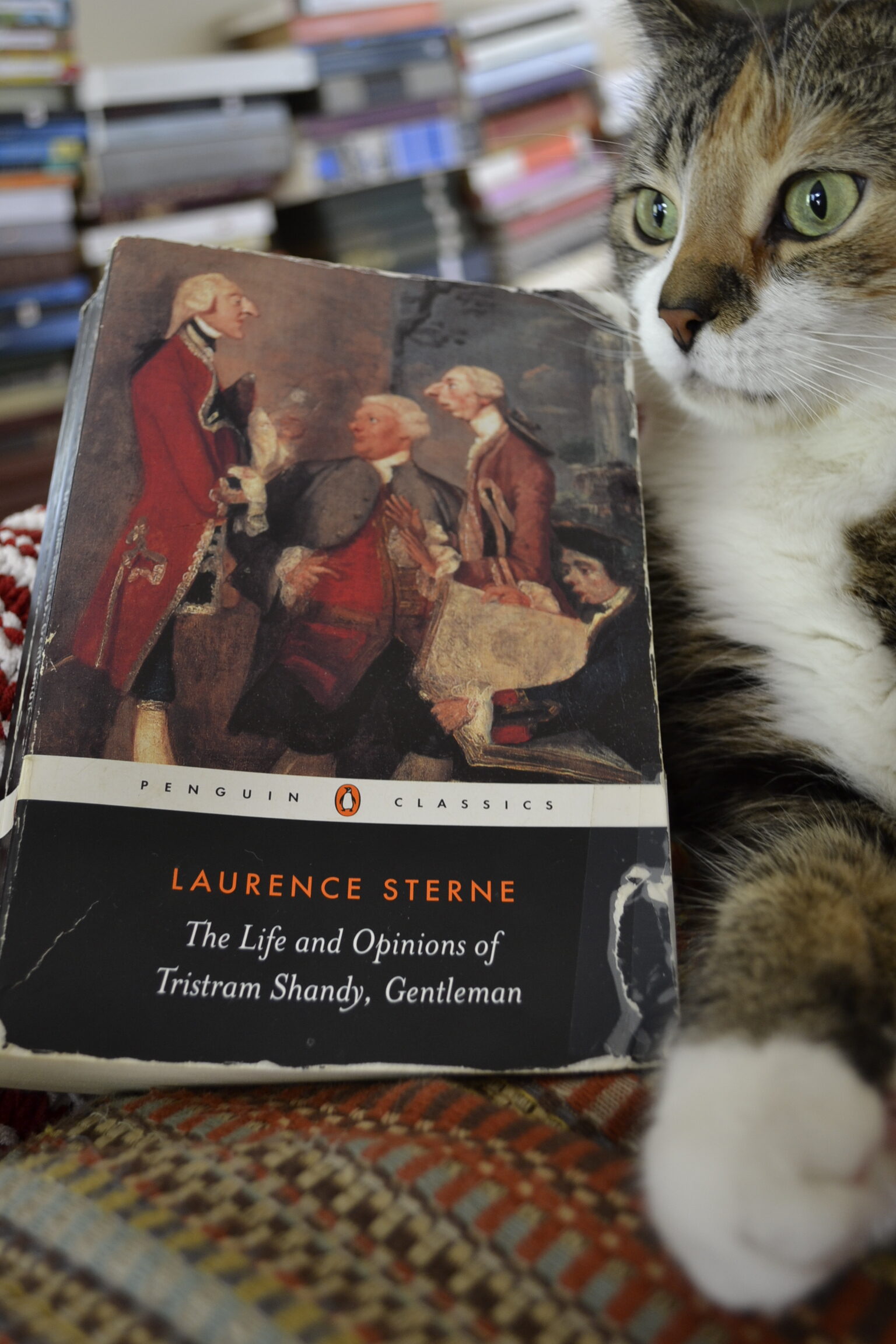 An Experience to be Shared

I have mentioned Laurence Sterne’s famous portrait before, but I think now is the time to actually talk about his magnum opus and how I came to read it.

My lovely spouse has a degree in English Literature, and when we were in university she raved about Tristram Shandy. But time was scarce, life got in the way, and it was only a decade later that I actually got to ask her about borrowing her copy. Her eyes lit up when she dug it out of the bookshelf we have put aside for her old school curriculum books. She was so excited, just to have me share this book with her.

She doesn’t get excited over books often, but I saw why this one was special the moment I started to read and to laugh and to be amazed that something written so long ago could make me laugh hard enough that I started to cry. Only to start laughing all over again several minutes later. It’s a book that changed the way I saw font, style, technique, and it showed me the power of humour to be as immortal as literature itself.

What Exactly is a Nose?

The Life and Opinions of Tristram Shandy, Gentleman is actually not much about Tristram Shandy himself. It’s about his family, his birth, and the slightly more sophisticated side of the typical 18th century bawdy humour. The book is a masterpiece of language, word play, and timing. Most of the time, the reader is laughing because of the turns of phrase and double meanings of words as well as twists of circumstances, coincidences, and stories that have one meaning on the surface but are clearly referencing another one.

For instance, one of the predominant themes of this book is: just what nose is Sterne talking about? Which nose do the forceps flatten on baby Tristram? Why is everyone so fascinated by Slawkenbergius’ nose? Well, it’s a matter of 18th and 19th century slang and I suggest you look it up before reading the novel.

Also, the section on the widow who tries in vain to court Toby, Tristram’s rather clueless uncle, and the questions she tries to ask about his war injury — without being too injurious — is hilarious as well. Sterne uses politesse and language to maximum effect in order to keep the reader in stitches. Toby and Trim and their antics form at least half of the novel, and that’s a good thing.

Half of the Fun is in the Typesetting

Part of the fun of reading Tristram Shandy is the typesetting. Sterne plays with censoring and asterisks. He includes a page that is in mourning and is therefore completely black. He uses dashes and punctuations with an artistry that I haven’t seen from writers either before him or since. He even uses white space, superscript, and subscript.

What makes it even more impressive is that he played with typesetting at a time when one didn’t have a computer to make it mechanically easy. I would hate to have been the typesetter who had to deal with all of Sterne’s idiosyncrasies and goals to stretch what print could do. I can’t imagine it was an easy job, but the novel wouldn’t be same without it.

Roasted Chestnuts Can be Quite Painful

But you want to know what made me laugh out loud? Right in the middle of the sitting room, loud enough to startle at least three out of five cats out of a snooze?

The chestnut. But not just the chestnut, but the timing of the chestnut falling and the placement of the scream of pain as well as how it is written and typeset. It’s brilliant and funny, and Sterne conveys the moment perfectly and draws it out just long enough. Words can’t really describe it; you have to read it for yourself.

This book is 588 pages long, and there are points when you just keep reading the book because you can’t put it down and it’s very funny. However, I will say that there are some points when the book slows right down and the atypical structure seems to get in its own way. And, yes, the Slawkenbergius section could have been shorter.

But, despite the drawbacks, this long book is worth the long read.

When my lovely spouse and I sit down and write, we carefully consider font, style, and layout and I don’t think I would be so careful about doing that if I hadn’t read what Laurence Sterne accomplished. The little details and techniques matter, and can be the difference between a good book and an unforgettable one. Also the way Sterne uses language to create humour is something that we’re constantly working on in our own writing.

On quiet evenings, sometimes we dream in our sitting room about what we would say if some interviewer somewhere in the fantastical future (where we have illustrious literary careers) asked us about our influences. Tristram Shandy always tops our list of books that we would mention as being essential to our development as writers.

As for movies? Well, we do like Nightmare Alley without the alternate ending and Alfred Hitchcock’s Rope. But that’s a discussion for another day.

And so ends Long and Short September! Next month I’ll predictably be reviewing spooky books in honour of October and Halloween. It promises to be a month full of ghostly books, so don’t miss it!