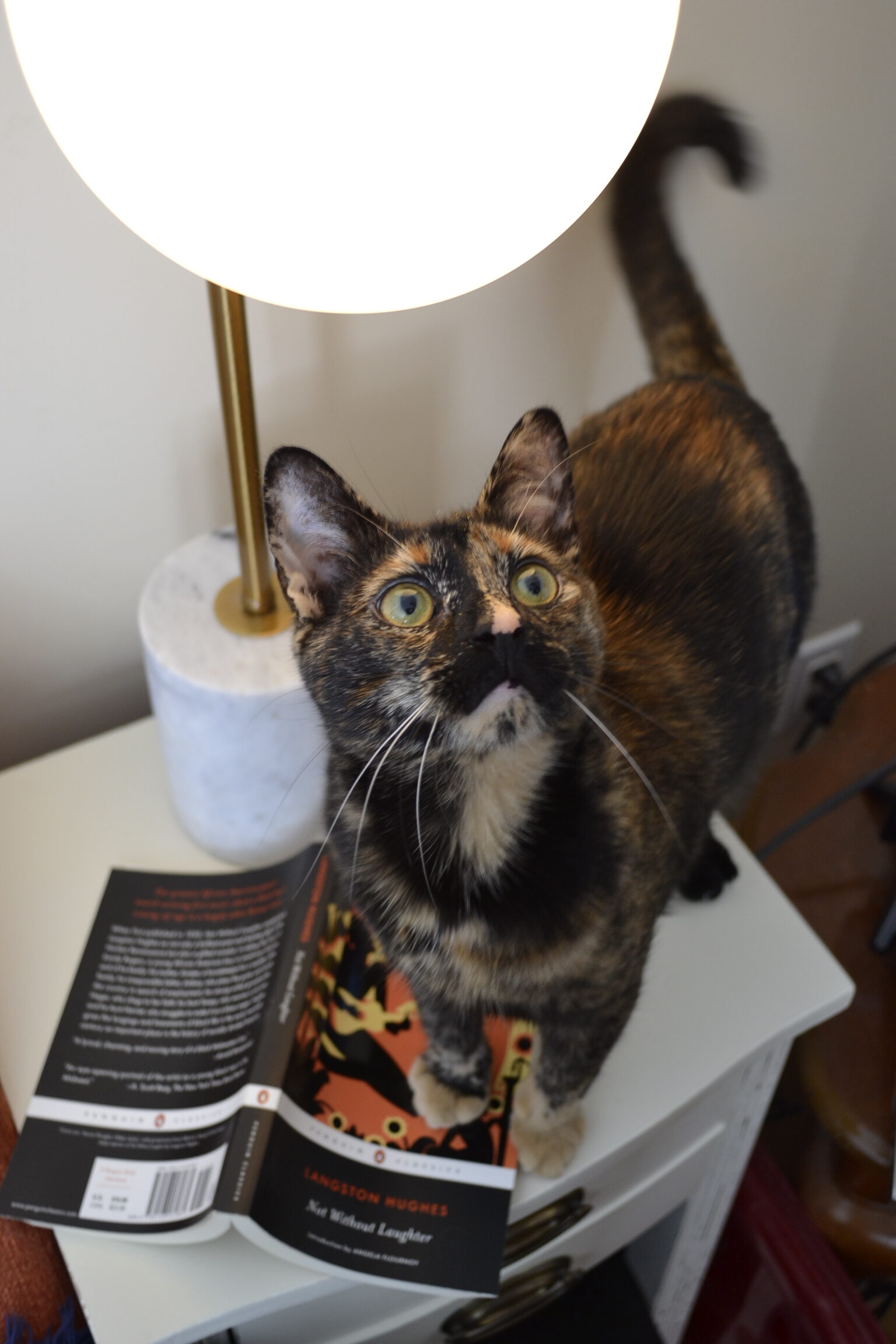 I’ve been dealing with major depressive episodes for as long as I can remember, and even I struggle with how to put that sadness into words. How to describe the weight of the pain and hopelessness eludes me, but I can tell you that under that weight there are no smiles, no laughter, and a suffocating dread that maybe there will be no smiles or laughter ever again. There wasn’t for me. For a very long time.

But then I met my lovely spouse. And when I’m having even my worst day in the middle of a very long episode, she turns to me with a smile and a silly face and a comforting hug where she squeezes me extra tight. She talks to me in our language and she plays the movies that we love and talks about the writing that we can’t get enough of. She helps me organize books, she talks to me about them, she pours all of her time and her attention into helping me with the weight.

And in those dark, suffocating days where I cannot see the light at the end of the tunnel, we can still laugh. That laughter is precious and I’m grateful for every single second of it.

A Story About Growing Up

Not Without Laughter is the story of Sandy Rogers who is growing up under the watchful eye of his grandmother in the American midwest. Sandy’s father is wandering and shiftless, his mother has little time for him between working and pining after his father, and his grandmother is elderly and struggling to make ends meet by taking in washing. Sandy also has two aunts — one of whom has little to do with the family she left behind and other being an aspiring singer who loves music but cannot see eye to eye with her mother.

Hughes uses this story to make a statement about the realities of systemic racism that existed everywhere, not just in the American South. It’s a narrative about trying to find a place of belonging in the midst of a society that is alienating and cruel and has festered hatred not just between races but amongst families, dividing individuals from each other and parts of themselves.

The Importance of Music

Langston Hughes is primarily remembered for his poetry, but his prose is just as poetic and perhaps the moments in Not Without Laughter where this shines most of all is in Hughes’ description of music and dancing. The dance that Sandy’s Aunt Harriet brings him to is one of the most beautiful pieces of description that I have ever read in a novel. Everything from the diversity of skin tones to the sounds of the band to the movements of the attendees is lushly illustrated with a painstaking care to word choice as it can be used to create a moving, breathing, loud image of life, joy, and controlled chaos.

Here’s an example for you:

“Eu-o-oo-ooo-oooo!” moaned the cornet titillating with pain, as the banjo cried in stop-time, and the piano sobbed aloud with a rhythmical, secret passion. But the drums kept up their hard, steady laughter — like somebody who don’t care.

Particularly I was struck with the idea of the drums laughing, since I have never heard the sound of percussion described that way. But when I thought about it, I could hear the booming belly guffaw of the base drum, and the high chuckles of the snare.

Hughes weaves music into the novel as a whole and uses it to create atmosphere and celebrate culture as an inextricable part of the soul — as it forms a common piece of a community, a family tie, and an indelible part of individual.

A Yearning for Space

Like many coming of age novels before and after it, Not Without Laughter is a book about belonging and the quest to find one’s own way in the wilderness of young adulthood. Sandy is trying to find out who he is, and at the same time is seeing his family around him with fresh eyes. His grandmother, his mother, and his aunt all have different plans for him and different ideas of what he should be, but he has to determine his own road as he tries to look at them each objectively.

What makes his journey especially difficult is that the systemic racism and prejudice all around him close many doors in his face, and tug him in many different directions. What it means to be Black and successful differs between the individuals who influence him — his grandmother, his aunt, and his mother as well as his friends. His mother wants him to quit school and help her wait for his father’s return. His aunt wants him to go to Europe and not listen to the music he loves so much. Sandy must determine his own plans and define his own place in the world. He must find his own space and his own sense of identity and self even if it comes at the cost of disappointing those he loves the most.

It’s a powerful book, and one that I wish were more readily available and widely read.

Cats Make Me Smile Too

I will say that the cats also bring some laughter to some of my darkest days. They often gallop down the hall and I can hear their thundering paws when I can’t even get off of the sofa. Or else my lap is full of two or sometimes even three warm, purring cats while I’m reading. They also provide a routine and taking care of them is partially taking care of me as well — giving structure to days that feel formless.

There have been many times sitting in waiting rooms when I’ve been in tears or near them that my lovely spouse has brought out her phone and started showing me pictures of our cats. And, even though I was crying, I was soon smiling too.

So ends the first week of Black History Month. Next week I’ll be reviewing Zora Neale Hurston’s Their Eyes Were Watching God.