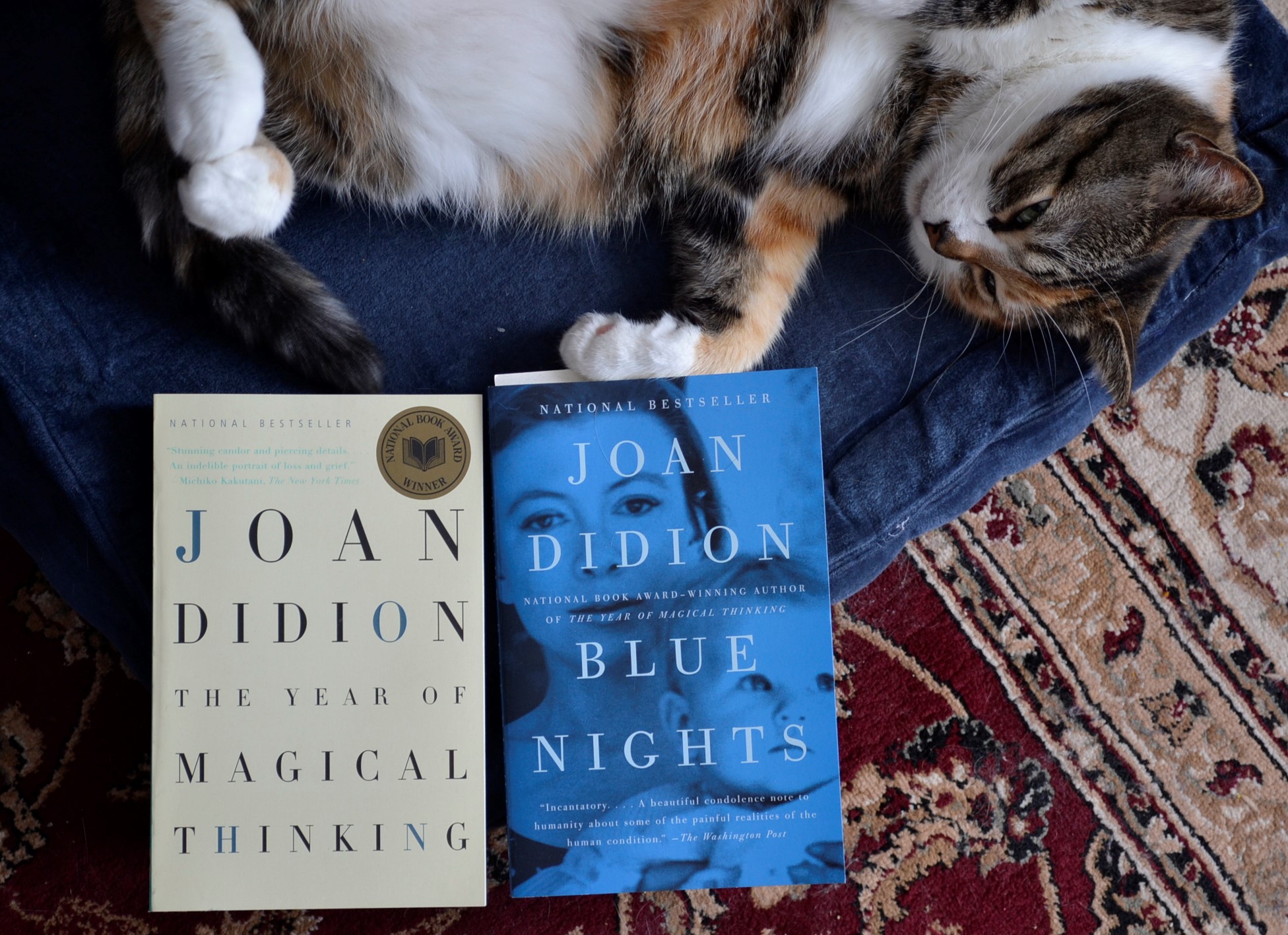 The No Good Very Bad Week

A lot happened in the last week, or, more accurately, one very big thing didn’t happen due to one of the worst snowstorms this region has had in a very long time. It’s hard for me to travel, so when we have to go on a trip, I spend a long time preparing for it, mentally. Car trouble and snow made travel utterly impossible, which seemed to upend every plan we’d made, which had a snowball effect in terms of stress.

In the midst of this bad week though, it helps me to read books about challenges in life and how others parse them apart and heal from them. It helps me to put things in perspective and focus on resilience and what’s truly important — instead of all the ways that the best laid plans can go wrong.

A Bit of a Departure

These two non-fiction books from Joan Didion are actually not terribly old. The Year of Magical Thinking is from 2005 (and won the National Book Award), and Blue Nights is from 2011. However, Didion’s career stretches across the last half of the twentieth century and into the twenty-first. She’s an author that defies categorization in the sense that the power of her voice transcends being defined by a particular era or even a particular literary discipline.

Her style is simple and direct. It speaks to the reader in a very distinct way. When you read her prose, it’s like Didion is sitting across from you in a sitting room late at night, talking about things that people often find difficult to speak about. She tackles topics like death, mourning, illness, aging, and motherhood with a grace that never shies away from brutal honesty and never gets lost in trite phrasing or flowery language.

These two books are probably some of her most accessible, but hopefully it will spark an interest in her other older work for you who have not read them.

The Year of Magical Thinking

The Year of Magical Thinking refers to the year after the death of Didion’s husband John Dunne during which Didion experiences a profound grief that leads to magical thinking. She has difficulties sorting Dunne’s clothing or moving his things because she believes that he’ll return — even though she knows that he won’t.

Didion’s description of working from home with her husband, spending 24 hours a day with him resonated with me especially because my lovely spouse and I spend 24 hours a day together. We’re barely ever more than a room and a hallway apart. I couldn’t imagine the profound absence and the silence that Didion describes. Or, more accurately, I could imagine it and it would be incredibly, indescribably painful. Her description of getting used to this silence is both heartbreaking and beautiful:

I could not count the times during the average day when something would come up that I needed to tell him. This impulse did not end with his death. What ended was the possibility of response. I read something in the paper that I would normally have read to him. I notice some change in the neighbourhood that would interest him[…].I am dropping my keys on the table inside the door before I fully remember. There is no one to hear this news, nowhere to go with the unmade plan, the uncompleted thought. There is no one to agree, disagree, talk back.

It makes me cry every time I read this passage because the possibility of that silence scares me so badly. I can see myself where Didion describes herself, waiting for a response that never comes.

She also describes replaying moments before Dunne’s death and wondering if there was something that could have changed the unchangeable. Her frame of reference remains what her and her husband were doing the year before, where they were, and if there were signs that death was near. The book ends with the year passing and the frame of reference finally fracturing as time stretches forward without Dunne there to be in it.

This book is one that is profound, moving, and full of an honest exploration of what grief and mourning truly mean and how society views them. Didion does painstaking research and weaves it into her own experience to create a piece of writing that captures a difficult to speak of — let alone capture — psychological experience. This is a book that should be read at least once, and preferably more than that. It’s a truly beautiful work of prose and non-fiction in general.

Blue Nights is Didion’s book about the death of her daughter, Quintana Roo. But, more than that, it’s about Didion accepting that she is aging and that her health was more precarious than it used to be. Didion struggles with mortality and the fear not just of death, but of a life that diminishes in quality and independence. It’s a conflict that’s at once utterly human and utterly inevitable because death waits at the end of every life. Didion is unafraid to share her fear and her experiences with the deaths in her family, but to say that this book primarily focusses on death wouldn’t be accurate.

Her meditations and memories of motherhood linger on long after one closes the page. Didion’s anxiety about the parent she was and the fears of being an adoptive parents extend from the specific into more general worries about the choices she made in life and the roads she did or did not take. Still Didion lingers on glimpses of her deceased daughter and husband and the suddenness of his death and her daughter’s. She talks about loss but, unlike in The Year of Magical Thinking, this grief is not brought to the forefront in quite the same way because Didion still can’t quite bring herself to write about it.

And even in the act of non-writing, there is an honesty there that rings out for the reader in a way that I’ve seldom seen in any other work.

A Word on Grief

Books on grief are, by and large, not easy ones to read. I guess it might be considered strange, but even though I read so much, I seldom turn to books on loss when I’m directly confronted with one. I doubt I could have read these books in the two or three months directly after my grandmother’s death. But now that I have some distance and have done some healing, I find that I’m seeking out more writing on grief.

Everyone handles loss differently but, for me, I find that books can sometimes soothe the lingering traces of immediacy and can help me think about what I’m experiencing in a way that isn’t continually emotionally overwhelmed.

While the grief continues, sometimes the weight of it abates as I’m able to examine it both more closely and with less urgent of a pain.