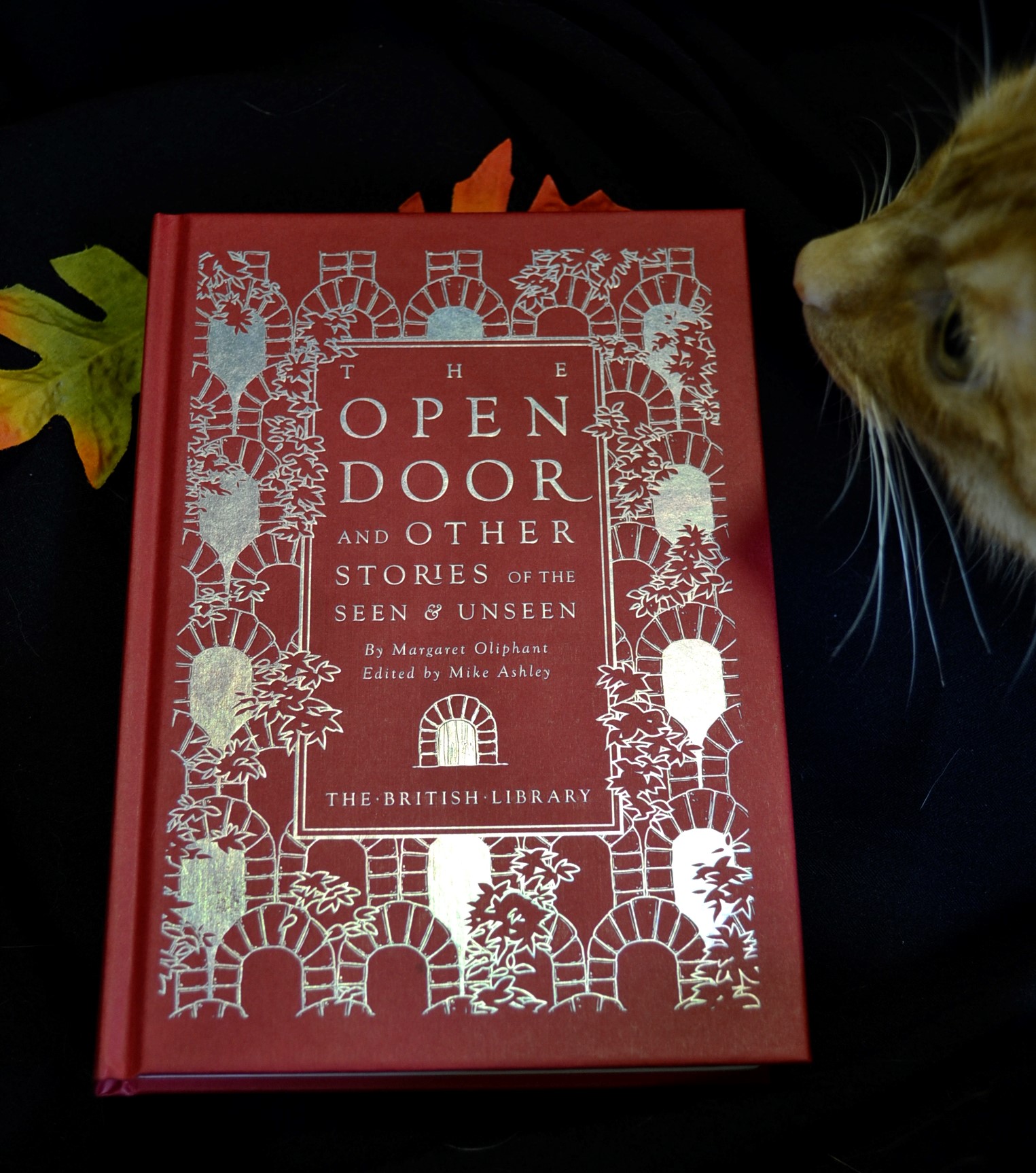 Get Out the Spiders and Bats

When September begins my lovely spouse and I decorate for fall which means we get out the coloured leaves and start hanging them in the sitting room, put the glass pumpkin on the table, and dust off the fall wreaths and lanterns. We also start to assemble our little Halloween village with trick-or-treating cats and five little pumpkins. But there are two pieces of décor we save until it is properly October — the paper bats and pipe cleaner spiders.

This year, Rusalka has shown a renewed interest in the oversized spiders dotted throughout our house, so I have no idea how long they will remain where we placed them nor where they will end up once she carries them off to play. I have higher hopes for the paper bats we attach on the wall so that they fly among the red and orange leaves.

It’s about to become a very spooky library/sitting room/home office!

Margaret Oliphant was a prolific writer, penning over 120 works that spanned the subjects of history, travel, and literary criticism as well as domestic novels. For someone who’s written so much, it’s surprising that her name seems mostly lost to time — though that seems to be the fate of the grand majority of prolific female writers of the Victorian era. What makes it more of a tragedy in Oliphant’s case is that her work is quite good — even better than a lot of writers whose names I’ve seen on the more mainstream ghost story anthologies. This anthology is a six of her stories from her series ‘Stories of the Seen and Unseen’, printed by the British Library.

Oliphant has a way of drawing out the story into thirty or forty pages that, instead of slowing the reader down, simply extend the suspense and creepy atmosphere of the narrative. It’s hard to put the book down because it progresses so seamlessly from initial description to unease to horror to conclusion. The structure of each story is a work of art in and of itself.

Oliphant’s skill shines in the moments where there is nothing to see but everything to dread. The title story for the British Library’s recent collection of her work is a perfect example of exactly what makes her a great ghost story author. ‘The Open Door’ is a narrative where the ghost is heard rather than seen. Oliphant manages to make the fact that there is nothing there far more terrifying than if there were something for the characters to see and be scared of.

Now, a haunting taking the form of sounds only is something that you may have read once or twice or even a few more times before, but I assure you that Oliphant takes the time and uses a lot of technique to make it special and scary. To the extent that it feels like you haven’t read anything quite like it before. That effect only comes from a writer that has mastered the balance between description and action and knows how to create an atmosphere that gives the reader the space to feel uneasy along with the characters and hear the spooky sounds based on the words alone.

That’s not to say that this same effect can’t be accomplished in a very short story. There’s one that happens to be in the Scary Stories to Tell in the Dark collection that I’ll be discussing later this month.

If I had any advice to give a reader of Oliphant’s stories, it would be not to expect a quick and scary punch in the gut. Oliphant’s stories require some time and space and a willingness to engage with the description. If you want to get the most out of this collection I would suggest you take a moment to settle in a comfy place, put on your favourite reading music, and shut the world away. Her stories don’t share space well with distractions like internet connections and televisions.

Her work is impressive and gives the reader the slow scare that is rare to find. In respect for that, it’s best to take the time to enjoy the story and not spend it with the daily mental multitasking that it’s easy to get trapped in when you’re trying to read. Speaking for myself, sometimes I have issues with concentration — so I waited until I knew I was having a good concentration day and I had an afternoon just to devote to these stories before I began the book.

As I write this review, my lovely spouse and I are enjoying the first of the many spooky movie marathons we usually have during the month of October. It’s my favourite month for TCM, since every year I reliably get to watch something that I’ve never seen before that becomes a staple of our Halloween watch list.

We’ve also cracked open the box set we have of Vincent Price films and the one small piece I have of Tales from the Cryptkeeper is ready to go as well. And did I mention my lovely spouse’s favourite — Beetlejuice?

This year is a bit extra special because we’re sprinkling a little bit of very early Christmas into our Halloween and combining both of our favourite holidays. It was quite a trying September full of a lot of stress and a lot of deadlines, so we both need a little bit of the holidays and cosy season right now.