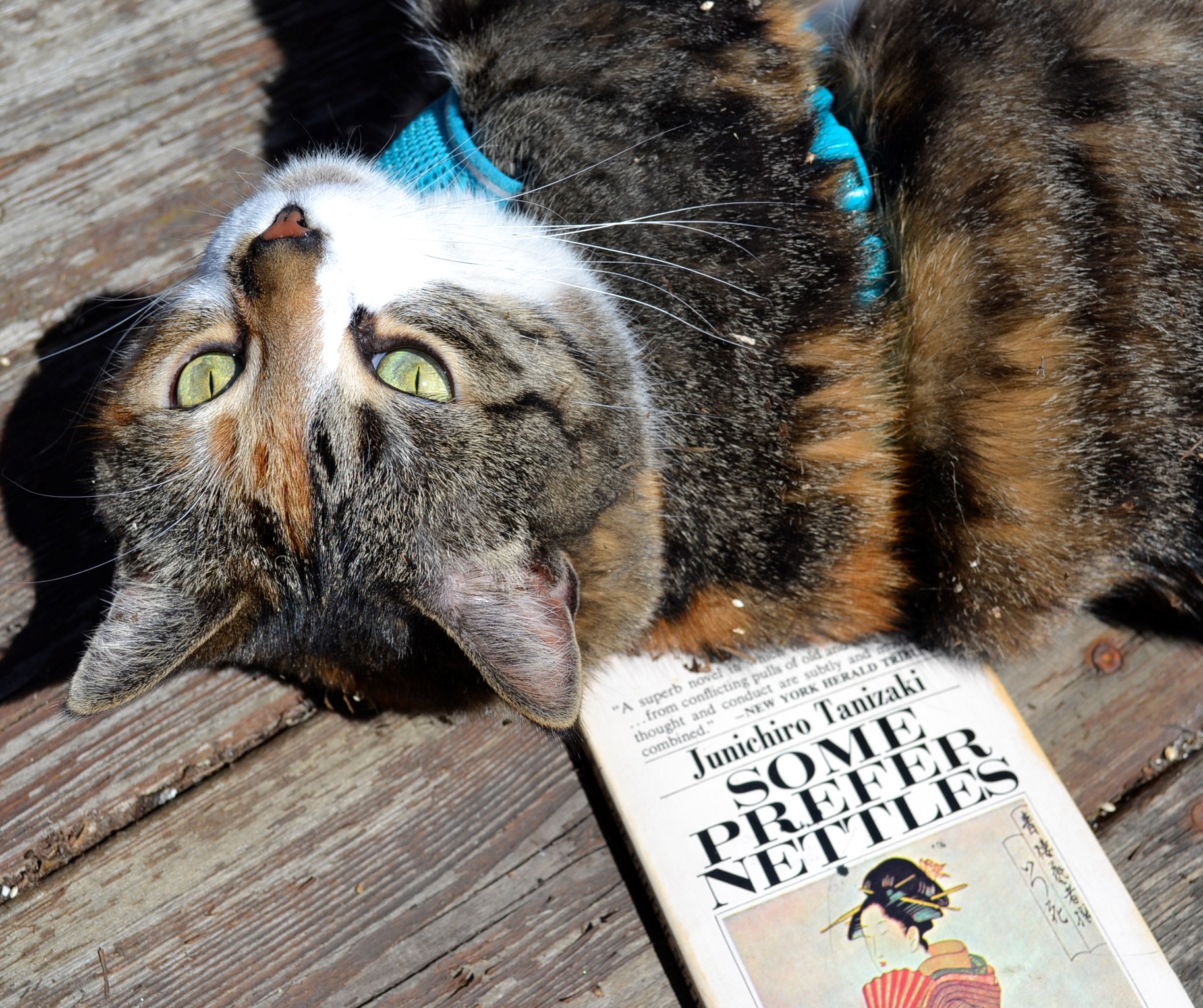 As we decorate for the spring and summer seasons, I get to once again enjoy the paper cranes that my lovely spouse hangs with string from the ceiling. There are only twenty or so in this display, but they are from the senbazuru I made several years ago, when my mental health was at one of its lowest points. When I started folding paper cranes, I was looking for something to do with my hands in those moments when I couldn’t stop crying, when reading was impossible, and I couldn’t even sit still long enough to do something simple like watch TV next to my lovely spouse.

I needed to soothe my anxiety, I needed to soothe myself, and I needed a small piece of hope that I didn’t have to manufacture out of the waning parts of my broken peace of mind. I read Sadako and the Thousand Paper Cranes some time ago, and re-read it when I decided to make my own senbazuru. The story never ceases to move me. The idea of comfort and hope even in the face of the inevitable. It got me through some very bad days. I’m so grateful I have less of them now.

Some Prefer Nettles (Tade kuu mushi) by Jun’ichir­­ō Tanizaki is a deceptively short book at 143 pages. The word count might make this work more of a novella, but the concepts and exploration of themes and symbols to support them are very densely packed. Density in a book can be overwhelming but it’s an indication of Tanizaki’s skill that the reader does not feel overloaded, but instead like they are interpreting a complex puzzle of interlocking pieces. Every word, scene, interaction, and object fits exactly into place. No more. No less.

Perhaps the most interesting aspect of the novel is the examination of performance both historically and in terms of the performances characters go through for the sake of saving face, or defending against impending decisions. Kaname’s marriage to Misako is ending in pain, indifference, and multiple kinds of betrayal, yet both are unwilling to truly reach an ending. Instead, the horrible situation drags on — with the real victim of it being their young son Hiroshi who both doesn’t know and chillingly suspects what is coming. It’s Hiroshi’s plot arc that truly is the book’s element of tragedy in the face of his parents’ selfish behaviour.

Some Prefer Nettles takes its main plot from the dissolution of Kaname and Misako’s marriage and their impending divorce yet, through Kaname, Tanizaki also examines the nature of obsession and the blindness that it results in. Kaname is obsessed with his ideal image of a woman to the point that he destroys himself and those around him including his son. His vision of his wants do not align with any kind of reality, but instead keep drawing him away from it through books, the lies that people tell him, and the world of the puppet theatre, as well as Hollywood films.

Kaname’s character is deeply conflicted between seeking succour in the (in his eyes) modernity of Hollywood films, and the increasing pull he feels towards historical Japan.  Kaname both wants everything and also wants nothing. His constant indecisiveness is meant to frustrate the reader and also to symbolize a crossroads in Japanese history and the dissonance between influences from the East and the West.

What Can’t Be Ignored

As skilled and articulate as this novel is, it’s a difficult read due to its tone of misogyny and sexist themes. Kaname’s ‘woman worshipping’ is really just his desire to possess a woman that is without any sense of self. He wants an object to worship, not a relationship with another human being. He wants both a harlot and a Madonna, to use the language of lit crit. In fact, that is the conclusion of the novel — that Kaname is attracted to the Japan of the past because what he realizes he wants is a doll to cook, clean, and serve him.

Tanizaki is absolutely using these tropes to make a point and he absolutely makes it but it’s hard to read a book that is relentlessly focussed on the male gaze and that presents female characters that lack any real individuality and are caricatures in and of themselves. They serve one purpose — to illustrate Kaname’s character and obsessions — and they are only defined in relation to him and the other male characters.

Again this is done partially to serve a point, but that doesn’t make it easy or any less repugnant to read. Still, Tanizaki is an incredibly gifted writer who works are worth studying. I can see why he is placed next to Mishima in the pantheon of modern Japanese literature. As such, I will be reading more of his books, but I do hope that there is less of this content in them or it’s not going to be pleasant.

Now that we can enjoy the spring breeze brought into our sitting room via the screen door, I sometimes like to take a break from reading to watch the birds. I also watch the paper cranes fluttering slowly in their formation by my armchair. It’s soothing, even if I haven’t actually folded one in a long time.

I will say that having hanging decorations has a few harrowing moments when you have inquisitive cats that occasionally get it into their heads to destroy objects you love. I’ve had at least one vivid memory of a tortie launching their entire, slightly chunky self at my head to get to the top of the chair and try to stretch out a paw to bat a crane.

But the cranes have survived, and so have I.