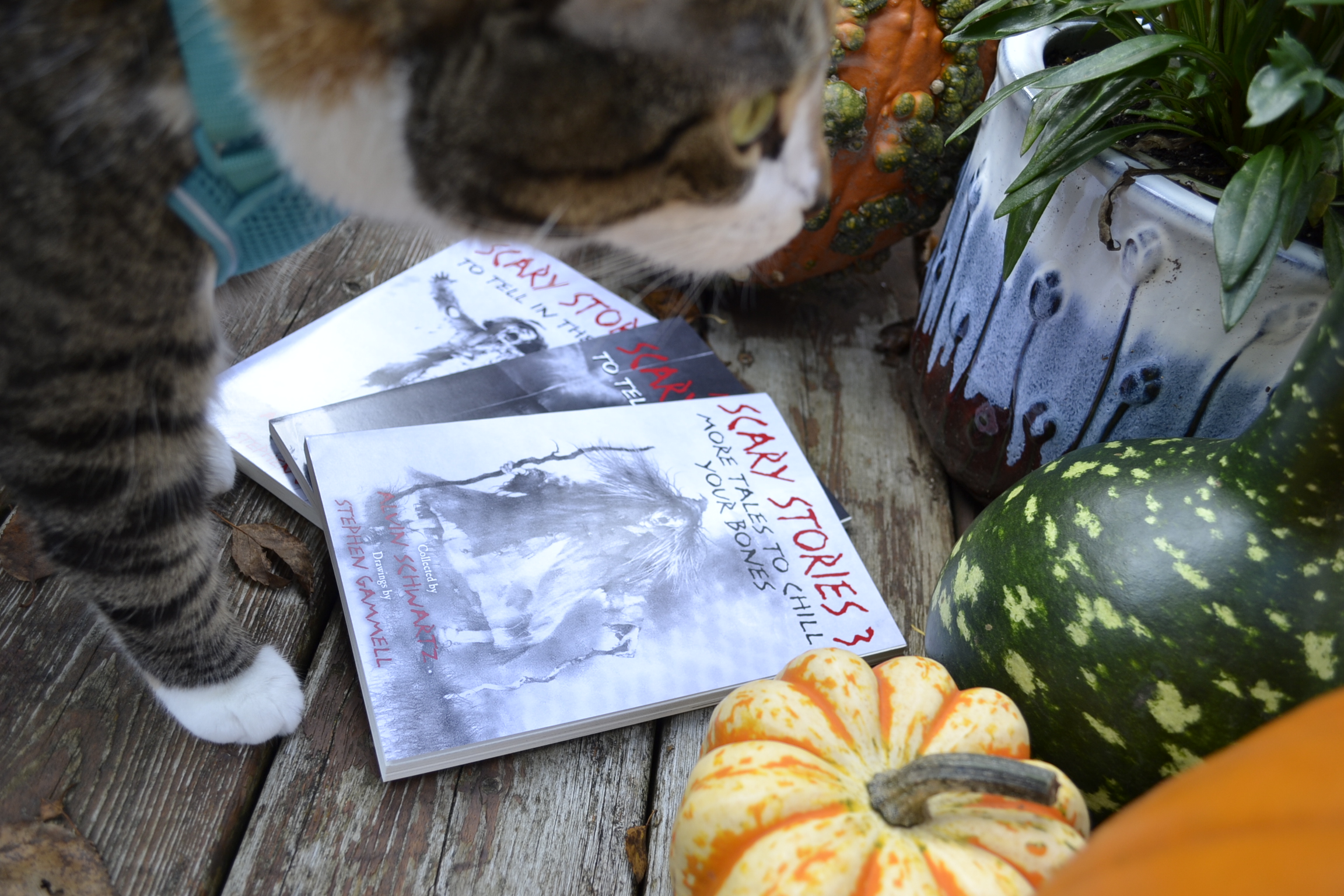 For the last week or so, the weather has been very unseasonably warm. The leaves are coming down in droves and the backyard wildlife is preparing for the chill winter ahead, but they are doing so in temperatures over twenty degrees. Perhaps that’s what had made the last few days seem so very un-October and it has no business to be un-October when it is October for only a precious thirty-one days.

Maybe the feeling is also generated by the fact that Thanksgiving seemed to spring up on me this year, but at the same time Halloween seems very far away. Fall always flies by at the speed of light. I love winter but it lasts six months. I always just start to really be in a space to enjoy fall when it abruptly fades and we get the first snows of the year.

Though right now it seems the snow will never come and the forecast is getting a bit chillier but not it’s going to be quite warm for a least another week or so.

Scary Stories and Their Origins

Alvin Schwartz’s Scary Stories to Tell in the Dark trilogy was one of my favourite sets of books when I was growing up. I used to go to the tiny local library and then the bigger library in the nearest city and raid the shelves of their horror sections. I devoured every book I could find on ghosts, the supernatural, folklore, and urban legends. I especially loved books that presented stories and the folklore they were based on.

Alvin Schwartz’s books do just that. They are collections of stories, most of which are from folklore, and some of which are urban legends or local myths. Schwartz presents each story with impeccable, engaging writing that preserves the essence of the narratives he has researched and gives them the impact they were meant to have. He also includes notes on each story discussing its origin and often providing further reading and additional resources.

The stories range across the spooky spectrum from jump scares to songs to humorous tales. But don’t be mistaken, some are definitely scary and they scared my child self many years ago and still spook the adult me as well.

A Comparison Between the Books and the Film

A film inspired by these books was released by director Guillermo del Toro a few years ago, and I was very excited to see it in theatres because I love Schwartz’s books. However, I admit to being more than a bit disappointed. The visuals and direction were impressive and preserved the spirit of Stephen Gammell’s artwork, but the writing was lacking. The plot stringing the stories together wasn’t very compelling and the stories in and of themselves were re-written in a way that didn’t preserve the careful essence of Schwartz’s writing.

The film is worth a watch, but it doesn’t compare to the books and the place they hold in the canon of scary story collections.

There was also a lesser-known adaptation of one of the collection’s stories, ‘Harold’. Rosewood 5 Studios’ 2015 independent adaptation was named ‘Hatred’.

A Word About the Illustrations

A while back, I remember browsing through a bookstore around October and seeing an entire table of spooky story anthologies for kids. I was immediately drawn to the Schwartz, especially because it was a hardcover, very fancy edition. I nearly took it to the register when I absently started flipping through it and noticed one key difference. Gammell’s illustrations had all been replaced.

That was truly disappointing, and needless to say I put the edition back on the table and didn’t purchase it. Schwartz’s stories are incredible, but Gammell’s illustrations are just as incredible. He creates a darkness using pencils that is absolutely terrifying and the images both match the story perfectly and stick with you long after you’ve finished reading the book.

In some ways, I can see why a publisher would consider other illustrations for an edition for children. I know when I was a kid I definitely had a few nightmares based on Gammell’s work — I found The Thing’s illustration particularly unsettling. Perhaps less terrifying images would make the books more accessible for younger readers.

There’s a lot in the collection for children to enjoy and these are books that I think would be fun to share with a child. But if you’re an adult and looking for books for yourself, I strongly recommend seeking out Gammell’s illustrations specifically.

The Cold and Damp is Coming

As much as I am currently complaining about the unseasonable warm weather, I know that the cold is coming soon. We usually experience a week or so of chilly rain and then the snow belt starts to properly earn its title.

For the time being, I’m putting on the fireplace channel when the curtains close for the night, conjuring up howling winds and frosts in my mind while I read spooky books and think about Halloween. Next week is the last post before Halloween already and for it I have another childhood favourite in mind — again with some great illustrations.