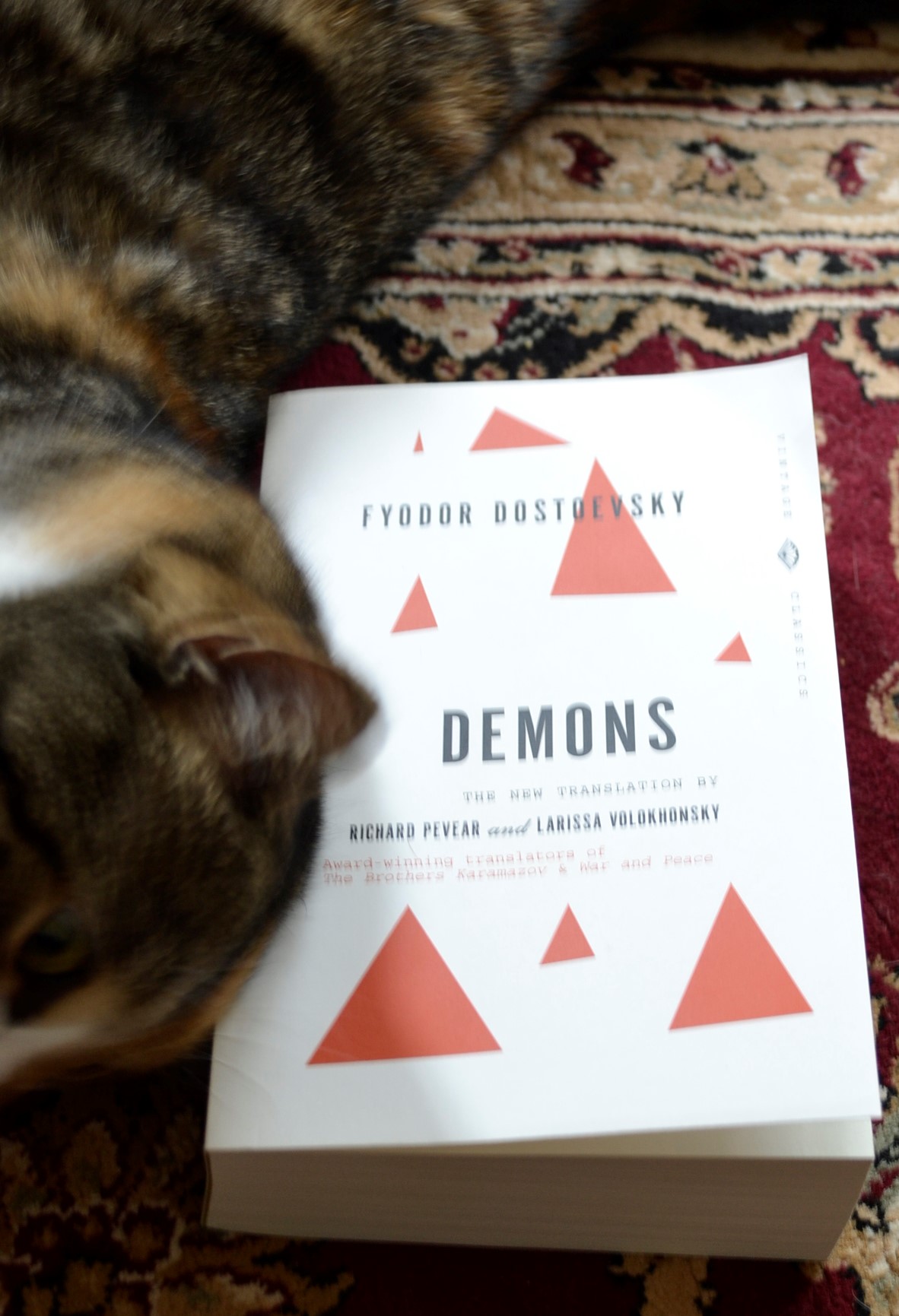 Last night, my lovely spouse and I went outside to bring in the birdfeeder for the night and the recycling bins from the collection that morning. It’s been unbearably humid and hot and we’ve been busy, so our morning teas on the porch have not been happening. I’m sensitive to heat and as such I’ve missed that hour in the early morning when it’s quiet, the air is cool, and I can watch the birds, bunnies, and squirrels going about their various errands.

Last night a cold front was moving in, so the air was cool and the bunnies were in the yard, munching away on the clover that grows on our ridge. It almost felt like fall so we sat outside and enjoyed the waning sun casting orange light across the lattice work of neighbouring yards. Normally, summer makes me miserable, but last night I just sat and enjoyed the breeze, trying not to think about the end of next week when the heat is supposed to get unbearable again.

In order to understand Dostoevsky’s Demons, the reader must understand the political climate in which it was written, and therefore know something about the turmoil occurring in Russia during the 1860s. My knowledge is by no means extensive, but, for example, I found it incredibly useful that I have previously read Chernyshevsky’s What is to be Done?, some of Turgenev’s works, and have heard of some of the literary figures Dostoevsky references.

In the late 1860s, Russia was a country in upheaval as student groups and other forces started down the road towards eventual revolution. Ideas about politics, government, philosophy, society were all being discussed and debated in sitting rooms, universities, and the streets. Demons is a novel that, in essence, is a reaction against the idea of nihilism — both moral and political.

Demons takes place in a small town in Russia that becomes caught up in the political nihilism of one Pyotr Stepanovich Verkhovensky and the moral nihilism of Nikolai Vsevolodovich Stavrogin. The former orchestrates a murder in an effort to cement together his political co-conspirators. The latter wallows in his lack of morality, creating a mystery wherever he goes as to what his motives are, what he has done in the past, and what he is capable of in the future.

Dostoevsky weaves a narrative that has multiple twists and turns and surprisingly comic moments in the midst of so much utter tragedy. One of the things I’ve always admired about Dostoevsky is his ability to both make a statement about politics and philosophy in general, but at the same time to examine the politics, philosophy, and psychology of each character individually. It leads to a lush narrative that can be examined in many different ways because it includes so many different facets. Though this book is seven hundred pages long, it doesn’t feel that long because there are so many concepts and techniques that command the discerning reader’s attention.

Many Voices at Once

Though Demons has a defined narrator, Dostoevsky creates a sense of omniscience in terms of describing most of the events of the novel. The narrator’s voice is stronger at some points, then almost completely fades away at others. A complicated effect but one that pays off in terms of atmosphere — creating a sense of vagaries, gossip, and second-hand information given in retrospect. It adds to the feeling that the events of Demons have become legend in the fictional town they occur in as well as the surrounding area.

It speaks to Dostoevsky’s skill that this style doesn’t seem like a cacophony of conflicting voices. Instead, there is one smooth, fluent voice that is guiding the reader in eavesdropping on the ins and outs of an entire village full of unique individuals, with unique histories, and unique points of view.

Many Things at Once

I’ve already mentioned that Demons is a reaction against nihilism. It’s also a scathing satire of prominent contemporaries of Dostoevsky, of Russian society, as well as of Russian politics. Particularly, there is a character that is clearly modelled after Dostoevsky’s feelings about Ivan Turgenev. The events of the novel are even based on an actual murder and an actual political circle and its conspiracy.

Also, the novel is a philosophical discussion of topics such as how one person’s depravity causes untold destruction around them, responsibility, fear, group dynamics, and the motivations that individuals have when joining extremist political groups or taking part in conspiracies. Dostoevsky also includes an extensive discussion of suicide, though be aware that this is a philosophical discussion and not one that has anything to do with any modern idea of mental health.

Also be warned that Demons includes content that may not be suitable for all readers, including graphic violence, graphic suicide, and the rape of a child. The last is not graphically described, but all the same it is present (specifically in the censored chapter that is included with many editions).

Waiting for Grass to Grow

I think we’ve probably mowed the lawn once over the past month because the weather has been so hot and so dry. When we drive to the nearest town, fields of corn and wheat are interspersed with burnt yellow lawns and trees with scorched leaves that imitate the foliage of early autumn.

Last year was so damp and rainy that it’s hard to believe that this year I find myself wishing for rain. But here I am, checking weather apps and wondering how long it will take before our front yard is green again and I’ll be complaining about mowing twice a week. We often sit on the sofa and watch the sky darken outside the window, waiting for thunderstorms, sighing when the clouds pass over and the earth under them has gotten no relief. The air remains humid but at the same time dusty and expectant.

Because summer doesn’t last forever and, before I know it, not only will the rain sweep over all of the dry backyard paradises but I’ll smell fall in the air.

Then I’ll start waiting for my birthday and the cold weather while my lovely spouse counts the days until Halloween.