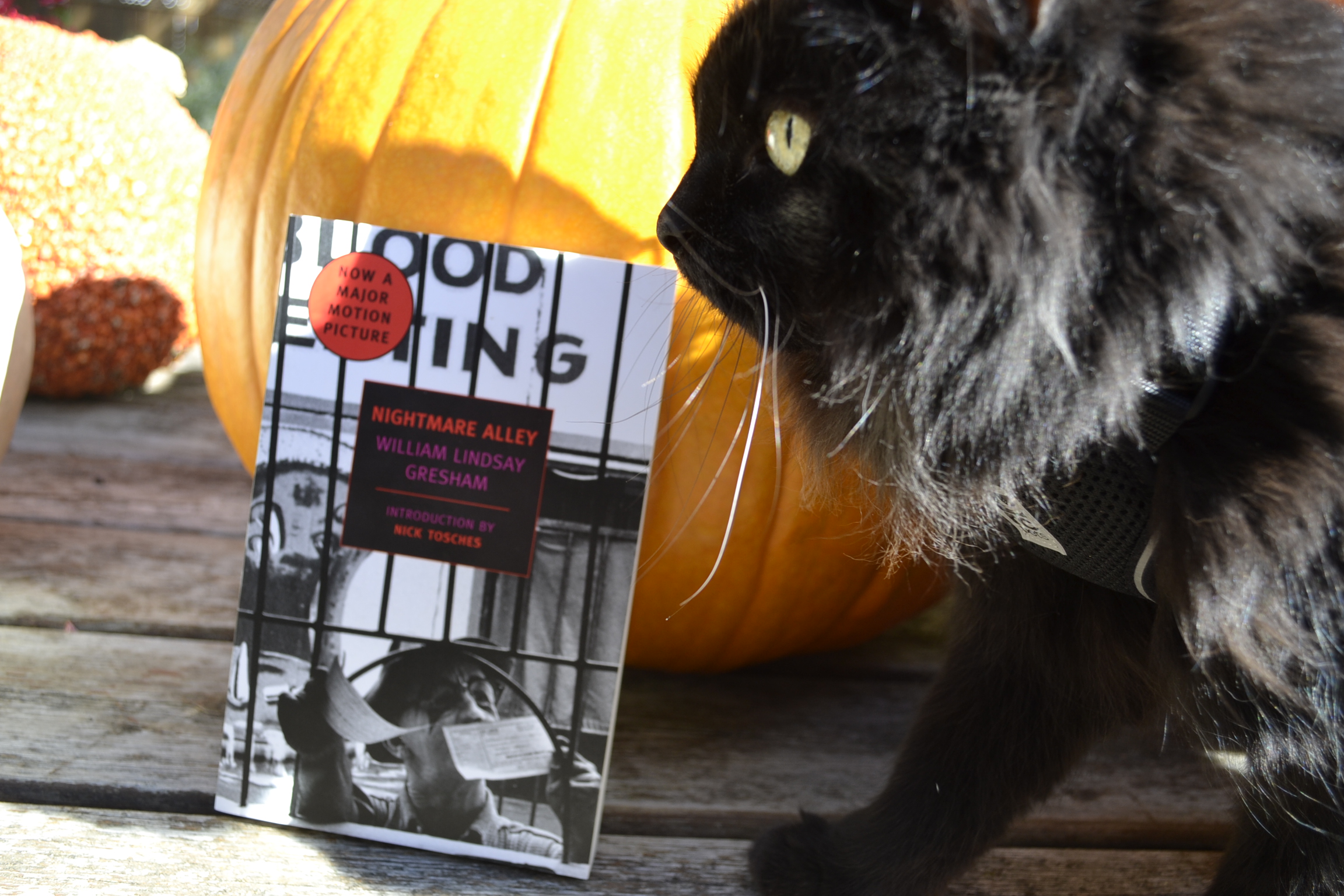 In the midst of a flurry of Thanksgiving grocery shopping, we decided to go and get our Halloween pumpkins. It’s a bit of drive outside of town and into the rolling fields of freshly harvested corn, but it’s a pleasant trip to a lovely family farm where they’ve been selling pumpkins from their patch for over fifteen years.

My lovely spouse is drawn to the pumpkins that have the most unusual shapes and features so we ended up with one very bumpy pumpkin, one slightly less bumpy pumpkin, a white pumpkin, some squash and a tall thin pumpkin. But she always lets me choose one ‘essence of pumpkin’ pumpkin. Round, with a good stem, and a bright orange colour that begs for the traditional triangle eyes and nose with the spooky smiling mouth.

Maybe I’m not particularly creative when it comes to carving, but I enjoy having one pumpkin that seems to leap straight out of It’s The Great Pumpkin, Charlie Brown! If that makes me cheesy, then I guess I’m pumpkin cheesy.

The whole spooky carnival theme has been popular in recent years. Enough so that I’ve seen it as a theme on a lot of Halloween baking shows and Halloween gingerbread competitions. When I think of spooky carnivals, I happen to think of William Lindsay Gresham’s Nightmare Alley. It starts in a carnival with a cold reader named Stan Carlisle asking about what makes a geek (a performer who eats the head off of live chickens in a ‘geek show’). What follows is a twisting, dark narrative through various deceptions and con games with the stakes getting higher as Carlisle turns from a carnival worker into a mind-reader then a spiritualist and finally a reverend. All in the pursuit of the ultimate con with the ultimate pay-off.

Gresham not only details all of Carlisle’s thefts, but he delves into the character of Carlisle himself and what drives him to abandon all other pursuits apart from money and become an utter misanthrope. Gresham takes the novel to some pretty dark places all to illustrate what a depraved and horrible man Carlisle is and how that doesn’t prevent his star from rising or from eventually falling when he meets someone who turns his own game back onto him.

It’s a compelling read, but I will warn that it isn’t for every reader and it isn’t an easy read. However, it’s a tale and an ending you won’t soon forget.

A Tale of a Con Artist and His Con

The con artist is often a character that gets the short end of the stick in terms of depth and exposition. It’s easy for a writer to get lost in their deceptions and take for granted that every reader knows that these characters are horrible people in order to skip over the more interesting parts of the story. That part being what shaped them and when they made the choice to become who they were. Gresham’s look at Carlisle and his past is unflinching and extensive. It’s the backbone of the novel more than any other component.

There are other components that play a role in the narrative, but they are lacklustre in comparison. Specifically, the scenes and chapters that are from Molly Cahill’s perspective are particularly problematic and suffer from the hallmark problems of male writers poorly writing female characters. There’s a lot of stereotypes and just plain sexism. They are truly hard sections to read. Not that these are the only passages that are hard to read. The novel is from 1946 and features a large dose of out-dated ideas that go well beyond cringey.

A Few Words About the Film

I was first exposed to Nightmare Alley via TCM’s Noir Alley and the 1947 film starring Tyrone Power in one of his few villain roles. I thoroughly enjoyed the film, though it is a lot different from the novel. The ending is perhaps the most notable difference. It’s a trite, awful ending when the novel’s ending is full of power and impact. The film also doesn’t have the ability (due to the constraints of what could and couldn’t be shown in films when it was produced) to go to the depths of Carlisle’s depravity — so the end of Carlisle’s career comes in a much softer, fluffier way much earlier in the narrative. The psychologist also plays a somewhat truncated role. As for the most recent film adaptation, I personally haven’t seen it, so I can’t speak to what it does and doesn’t include.

I would recommend a watch of the 1947 film either before or after reading the novel. It’s interesting to compare Gresham’s work with what actually made it to the silver screen.

The air is crisp and cool, and the leaves are beautiful. The pumpkins are serving as our porch décor and I’m excited for the special meal and the time my lovely spouse has off from work. We’ve decided that this year we’re going to watch a combination of Halloween specials and some very, very early holiday specials. That means Vincent Price and Muppet Family Christmas right up against each other.

It’s a bit of an experiment, but it’s the time together that matters. I just hope there’s no holiday whiplash.