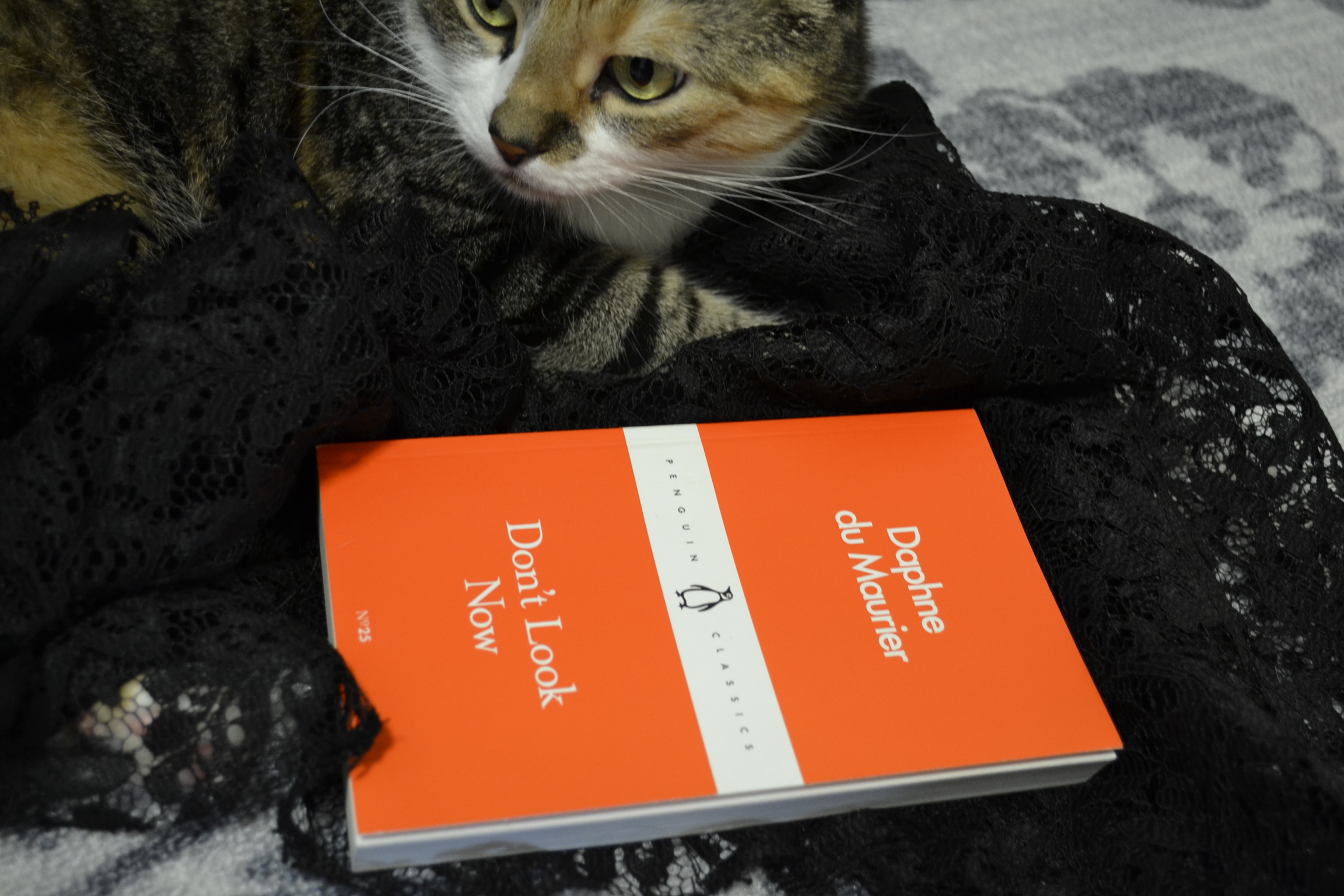 But Why Can’t You Look Now?

What is it about cats that they are so sweet and so cute and so photogenic all day long but, when they sense that the camera is about to make an appearance, off they go — to the far reaches of the basement or the closet?

Normally, when I place any little piece of fabric on the floor, I automatically have a cat on top of it, rolling around and being adorable. Today, the camera was out and I was poised to take some photos of all of that adorableness and there was not a cat to be found. Hence, the stakeout began.

I sat on the very corner of the rug with the camera in my hands, waiting for an opportunity. Trying not to move. Trying not to even breathe too deeply. I got the picture I wanted after a half hour of patience.

Then I packed up the camera and instantly all four cats were out of their hiding spots and frolicking at my feet. And such is the life of a cat owner.

This week’s Halloween in August pick is from a classic horror writer. Don’t Look Now is a collection of five stories written by Daphne du Maurier, all of them sharing a tone of unease, some with themes of the supernatural, others more about a mystery. There is a blind woman with visions, murder mysteries, a disturbing secret, and the quest to find some kind of purpose to death.

Of course, some stories are better than others. Du Maurier’s writing is always smooth, and her style is unique in its near perfect balance of driving plot, description, and dialogue — but I would call this collection a bit of a departure for her. It’s quite different from Rebecca.

While Du Maurier includes twists and turns in every narrative, these stories have no Manderley. Settings are important, but some of the description and atmosphere has been sacrificed to keep the pace very breakneck. It works mainly because of the length of each story, but you can’t help but notice the difference when you think about du Maurier’s longer work.

Another thing to note is that this collection of stories was released relatively late in Du Maurier’s career and while their settings are contemporary to the seventies, they have a feel to them of being older closer to the thirties or forties. There is also a feeling of interiority that seems to pervade the narratives even if it doesn’t appear to be always intentional. This is probably a consequence of Du Maurier’s reclusiveness at this point in life, and explains why the narratives seem to have a feeling of isolation to them — as if they were written from a perspective of distant observation of the world instead of active participation in it.

‘Unsettling’ is the Word I Would Choose

I’m not sure I would call these horror stories in the traditional sense, though that is how they are often categorized as thus. I think the best way to describe them would be to call them disturbing, unsettling, uneasy tales that are hard to read without at least a bit of a mental cringe.

Part of that effect is intentional on du Maurier’s part. The twists are supposed to be unsettling and the reader is supposed to be dreading what’s about to happen — that is the type of horror story she is writing.

However, some of that cringe comes from the fact that these stories have not exactly aged well. The humour is dated, and definitely not for modern sensibilities. Some of the content and language is very offensive. So offensive that it was difficult to keep reading. Du Maurier includes it to illustrate how horrible certain characters are, but that intent is not salient enough, and leaves the reader wondering if that truly is why the content is there. That’s never a good thing.

Her other work definitely aged better than this collection of short stories, and I would recommend that a new reader start with one of her other pieces before reading this one.

While I was reading this book, I found myself struggling to find something to link all the stories in this collection together. I’ve read volumes of short stories where there are no recurring themes, but it felt like that wasn’t precisely the case here. The selections didn’t quite seem random, but at the same time felt like they didn’t quite fit together. The pieces all featured the same unsettling quality, but some stories seemed more connected than others.

For example, ‘Don’t Look Now’ and ‘The Breakthrough’ share a supernatural element while ‘Not After Midnight’ and ‘A Border-Line Case’ share the structure and tone of a mystery narrative. ‘The Way of the Cross’ appears almost to be the odd story out.

A collection doesn’t necessarily have to have a recurring theme to be good, effective, or enjoyable. It just seems like this collection was trying to present a feeling of more threads of commonality amongst the stories that weren’t quite there. I think probably these stories were presented together due to chronology more than any other reason.

As you can probably tell, Don’t Look Now had its moments, but by and large, it wasn’t my favourite collection of short stories. I still want to read more of Daphne du Maurier’s work, but I think I’ll start with reading her novels.

Just because the cats aren’t always co-operative doesn’t mean our phone isn’t full of cute cat photos. Because for every time a cat doesn’t pose for the camera, there are at least ten spontaneous instants where they’re just being cats and you snap a golden moment while they’re napping or playing on the cat tree, or begging for their favourite treat.

Whenever I’m waiting for an appointment or in line, my lovely spouse usually pulls out the phone and we start looking at pictures of our cats. Even when I’m having a bad day and being outside the house is difficult, those pictures never fail to put a smile on my face.

Because, in the words of Edward Gorey, “Books. Cats. Life is good.”